I used to love Christmas. The tree, the pressies, the endless sweets, bad TV and chocolate.

Now, it kind of feels like a guilt-ridden race to buy as much ‘stuff’ as possible or risk missing out on the mythical and impossible ‘magical Christmas’.

To me, ‘stuff’ is defined as anything I buy because I’m ticking a box. For example, I get my nieces’ presents because their parents get our kids presents. Box ticked.

I get Joni and Evan extra presents on top of their main present so they have enough to open on Christmas morning. They don’t need any of the stuff but parenting guilt means I inevitably buy too much. Box ticked.

I’m going to buy a fake Christmas tree because the real one had last year got infested with flies. What would the kids think if we didn’t have a tree decorated with plastic crap? Box ticked.

So, accumulating ‘stuff’ at Christmas feels like going through the motions and buying things because that’s what I’m expected to do.

In the meantime I’m frantically taking existing ‘stuff’ to charity shops and clearing out to make room for new ‘stuff’. I’ve even taken some things to charity that the kids still play with – total madness.

I want this to end as it feels like I have no control over Christmas. Ok, some presents have come from chariry shops, or selling sites and I’ve tried to buy non-plastic items where possible. But what about everything else?

Christmas is capitalism. We’ve known this for a long while and the endless bombardment of adverts makes it’s hard to forget.

Take this billboard advert for Meadowhall below. Can you actually think of anything worse than trailing all the way to Meadowhall after work, to trapse around shop after shop looking for presents for your family who are at home either tucked up in bed or wondering what the hell you’re doing at Meadowhall at 10pm at night? This isn’t the Christmas dream, people! 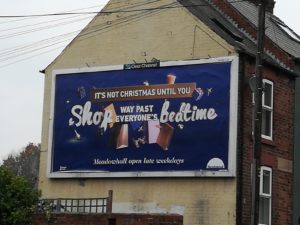 I don’t want to be a part of a merry making (or faking) machine that tells me my house should be decorated with this, the tree should look like that, and there should be at least 10,000 presents under it.

So what can I do? I don’t want my children to miss out, but I don’t want them to expect a certain level of ‘stuff’ at Christmas.

Here’s how I’m clinging onto control this Christmas:

Not buying presents for people makes me feel miserly, but it should make me feel free and a little bit smug.

If someone said they weren’t going to buy me a Christmas present because they didn’t want to spend money, get in debt or add to their carbon footprint I would be totally fine with this. I’d actually be relieved as it would mean less ‘stuff’ coming into the house.

So why does it feel like a vulnerable conversation to have?

Of course it comes down to the shame and judgement of ‘what will people think’ if I don’t buy them a present, or buy my kids 10,000 presents.

But if I’m buying people things because I feel I have to, then surely that’s disingenuous?

I’ve started too late this year and been swept up in tick-box-buying to get Christmas shopping done quickly. Next year it will be different. I might not go full Scrooge but I’ll certainly be buying less and checking out of the Christmas race to the bottom early.