So, we tried ordering our weekly shop online to save money, food waste and buying stuff we don’t need in general.

After 3 online shops we’ve decided to stop as I’m not organised enough to buy stuff before it runs out, so we ended up doing lots of mini shops for top up food.

The main reason though is that online shopping from Asda is a major rip off when it comes to fresh produce. The salad, bread and veggies we were getting had such short use by dates that we would have to have eaten all the fresh produce we’d bought within a day or two of buying it.

In the last order, we bought a packet of pitta breads that were mouldy by the next morning. Shopping online is OK for filling the freezer but that’s not something we do every week.

We have a new plan of action, buying a weekly fruit and veg box from a local supplier and getting the rest of our groceries from super low cost discount shops, usually found in the slightly dodgier areas of town.

For a mere £6 in Heron Frozen Foods I bought:

– 3 multipacks of Pomme Bears (the only thing on planet earth Evan loves more than waking up 10,000 times every night)

Not a weekly shop of course but a total bargain and a good chance to test the water.

Today we got our first veg box delivery from Beanies Wholefoods. Something feels very wholesome about getting veggies delivered, so I felt very smug when I saw our boxes tucked behind our blue bin this morning.

I ordered the £10.50 UK grown veg box and topped it up with bananas (not grown on the UK obvs), apples and pears.

The box was full of dirty veggies which, in all honesty, came as a bit of a suprise – we’ve bought neat and tidy supermarket veg for so long I kind of forgot that vegetables actually grow in the ground. And the best part is the only plastic in sight was wrapped around the celery, everything else was loose or in brown paper bags.

My heart sank a little bit when I saw the massive bunch of beetroot as I have zero idea what to do with them. However, I found a recipe for beetroot carpaccio in a Deliciously Ella cookbook and rustled that up.

Roasting beetroot meant it got a touch clammy in the kitchen but the results were well nice – a light, refreshing and tasty salad. It’s also healthy too but I don’t want to make too much of a big deal about that as I’d already eaten a chip butty.

Time will tell if the new approach to the weekly shop saves us money but it’s certainly reduced plastic waste so far. From 2 weekly shops online we accumulated 2 bags worth of plastic cartons. 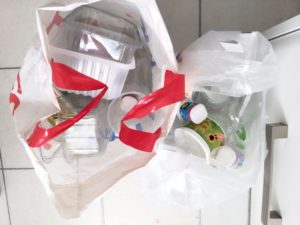 Even when we’re trying to use less plastic it doesn’t work so maybe cutting out the supermarket is the only way to ditch the packaging.