Taking kids to a zoo is a great idea, right? Well this is what we naively thought.

Instead of it being a fun time for all, it was a horror show of epic Joni tantrums as she recoiled in terror at every single animal, including tortoises. Yep, the slow speed and gentle nature of these ancient beasts proved to be too terrifying for Joni. The only animal she did like were the zebras and that’s only because she loves Zoe Zebra from Peppa Pig. 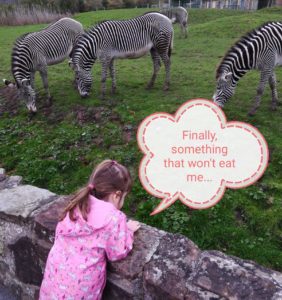 A trip to the zoo meant mixed emotions all round (except for Joni who was committed to terror the whole day). I aways like the idea of going to zoos but when I get there the animals are, obviously, in cages, albeit spacious glass enclosures rather than those with bars.

Thanks to what we’ve been getting up to as humans, many animals are probably much safer in zoos than they are in the wild, but as we’re the ones making it impossible for them to live in the wild, it seems a bit unfair that we then lock them up ‘for their own good’.

I’ve always thought it strange that we eat some animals, have some as pets and then treat others like four legged (or two winged) celebrities and put them in zoos. I read an interesting article about how people who live in the rainforests that are being cut down to make space for palm oil plantations see orangutans as a pest, in the way we’d find a cat that kept pooing in our garden annoying. So why do we have such an emotional attachment to species such as dogs, cats, orangutans or anything else that’s deemed special enough to live in a zoo, yet many people are quite happy to eat others?

Putting aside these ever present kill-joy thoughts, I did my best to have a good day out with the family

Chester Zoo is just a two hour drive from Sheffield so I wedged myself between the two carseats in the backseat, while my mum took the front seat and had the luxury of having life in all four of her limbs throughout the journey.

Neither Evan nor Joni slept on the way. Before any journey Andrew and I have this fantasy that both babies will sleep and awaken feeling refreshed and renewed when we get to our destination. This didn’t happen though so two hours later, as I unfolded myself from the backseat, they were both a little cranky.

The elephants are the first animals you see at the Chester Zoo entrance, they bring out the big guns up front in an attempt to fill visitors with awe. It worked for me, Andrew, Nana and Evan, but it was the first of many, many animals that would make Joni cry with terror throughout the day.

Chester Zoo has some very handy signage, such as advice on how to make a compost heap and information about why bees are so important and the problem of palm oil and deforestation. I took pictures as I went round as there was no chance I’d be able to stop and read it with two toddlers who were intent on going rogue.

The Zoo has recently stopped selling products with unsustainable palm oil in them, presumably because it looks pretty bad to sell the very thing that’s destroying orangutans’ homes right under their noses. This is good, this eased my zoo guilt and meant that I didn’t have to go through the usual label analysis deciphering if something has palm oil in it and if it’s sustainable. (The question of how sustainable sustainable palm oil is remains of course.)

I asked for a glass of water in the cafe when we stopped off for afternoon tea and was pearl-clutchingly horrified to see that it was served in a plastic cup. I should have asked for a glass but I was exhausted after four hours of toddler wrangling at this point and needed to hydrate. There were also plastic spoons in the cafe. Double blow.

It seems like such an easy thing to change that I don’t understand why cafes still use plastic cups and cutlery. surely it’s cheaper to use glass and metal anyway?

I took my plastic cup and spoon home with me as I just couldn’t throw it in the bin. When we got back, Joni and I had a crafting session and transformed the spoon, cup and see leaves from the garden into this magnificent beast.

All in all Chester Zoo was a good day out. It taught me that in some ways I need to lighten up a bit and enjoy spending time with my family, instead of looking for the next eco-disaster. I don’t think Joni will be going to a zoo again any time soon but she does seem to have come away with a zebra obsession, as well as a new found fear of every other animal on planet earth.