It’s full of hip coffee house clichés but it works and it actually makes it a welcoming and comfortable place to eat. I hadn’t been here for over a year. Last time five of us had to sit around a tiny table outside with me trying to breastfeed Evan while sat on a wall next to a main road. Not the ideal scenario for family dining.

Thankfully, the cafe now has a lovely upstairs area, which is spacious and, praise be, has three Ikea highchairs. There’s nothing worse than those wooden highchairs, I hate them and Evan hates them. There are so many straps to do up the poor kid looks like he’s about to go on a parachute jump rather than eat brunch. 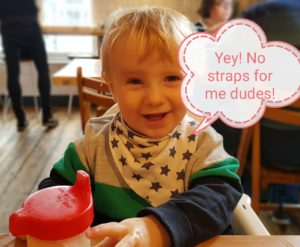 We arrived at 9.30am and were given an hour to eat as the place was so booked up. Always a good sign. There is a full vegan menu, which is basically a vegan version of everything but with chickpea tofu instead of eggs.

Just an aside on chickpea tofu, I’d never heard of this before and thought it was tofu made from chickpea but Andrew educated me and explained that it’s tofu fried in chickpea batter. Doh.

Thanks to the endless entertainment value of tiny Peppa Pig characters and plastic drinking cups, Joni and Evan played happily while Andrew and I enjoyed a tea and a cappuccino with Barista Oatly (although this was an extra 20p, bit cheeky).

I ordered the full English and Andrew ordered the huevos rancheros and, much to our delight, kids eat free with a main meal of the brunch menu. We ordered the kids baked beans on toast each.

Well, it was one of the best vegan full English breakfasts I’ve ever had. That sentence will be meaningless to meat eaters and it does sound like oxymoron, but who cares? It was so tasty it lasted about five minutes on my plate. No danger in us taking longer than an hour with food that good.

The chickpea tofu was indeed, discs of tofu fried in chickpea batter. I had three of them and I’m not sure if it was all in the mind or not but they did taste a little bit like eggs. I’m definitely going to try make these delicious discs of yumminess at home.

Andrew’s huevos rancheros was also tasty although a bit too spicy for me – he loved it though and broke his cafe rule of never taking pictures of food by snapping this delightful plateful.

The kids didn’t fare so well though. The baked beans were… wait for it… homemade and not from a can! The horror! It was like the waitress had systematically chucked every Peppa Pig character on the floor and stamped on them, such was their disappointment and remorse at the lack of salty sugary beans. They didn’t eat the sour dough either so the food waste at this meal was pretty high.

The only downside of the whole experience was that when we came to pay, both of us at forgotten our money. Evan had taken my purse out of the changing bag and hidden it in the depths of the sofa cushions and Andrew’s wallet was in his other jeans. So he had to drive home and get cash, while I looked after two tired and hungry kids in what was now a fully booked cafe.

Despite this, Vegan brunch at Forge Bakehouse was delightful and definitely something we’re going to do again.