This morning we went to Millhouses Park Cafe for a drink as Grandad Neil was racing his miniature yacht on the boating lake.

Today had added extra confusion though. Outside the cafe was this sign: 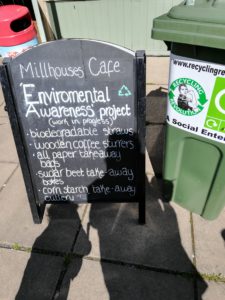 Wa-hey! I thought, this is a takeaway drink guilt-free bonanza! And next to the sign promising eco drink heaven – a recycling bin to get rid of any waste we did produce without the accompanying shame of chucking it in a regular bin or risking carrying a leaky used takeaway cup in my bag to recycle at home.

We went in and I ordered a strawberry soya milkshake, mum ordered a regular latte and Joni – totally oblivious of the chance to be an eco hero – ordered a Fab lolly.

My smugness was so that I was already imagining blogging about what an eco queen I am when the girl behind the counter gave me my milkshake. It was in a plastic cup, with a plastic straw. My fingers were now wrapped around the epitome of everything I’m trying not to do.

I drank it. I shared it with Evan so I could make myself feel better, yes it’s a drink in a plastic cup but it’s nourishing a baby so it can’t be that bad.

When I finished it, I put it in the recycling bin next to the sign that promised so much. After I’d dropped it in the bin, I then had doubts if it could be recycled at all, nevermind in a plastic bottle bin. It wasn’t a bottle after all. The bin was nearly empty though so there was no way of fishing it out.

When I got home I checked on the cafe’s website and felt marginally better as the straw at least was biodegradable. And, I did feel that we were supporting a cafe that was at least trying to gradually cut its waste as much as possible.