Today, Joni, Evan and I took the quarterly pilgrimage to Sheffield city centre to buy over-priced children’s shoes. We met Aunty Katie, as every mother knows, taking two toddlers shoe shopping solo is going to end in tears all round.

After spending £34 on a pair of shoes that barely fit in my palm for Evan (but, hey, they light up! What one year old doesn’t need that in their life?), we headed for lunch. Joni very quickly realised that if she said a pair of shoes was too tight, she didn’t have to have them, so five pairs of shoes later her seemingly giant boat-sized feet were still in wellies.

Katie suggested a new place she’d heard of called DINA. It’s on Cambridge Street, so round the side of John Lewis, and it’s a vegan and vegetarian cafe.

It was fantastic. There’s loads of room for prams, they have a high chair and a children’s menu and there are steps for Evan to repeatedly attempt to throw himself down, which soon became his favourite game. The staff were lovely and there was loads of food to choose from.

The kids got vegan sausage and beans (for Evan) and beans on toast (for Joni, who, if it’s not a bean, breakfast cereal, or cheese, won’t eat it). 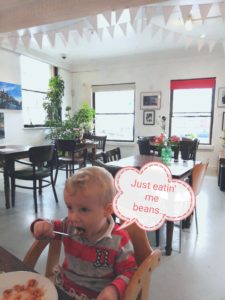 Katie got a flat white as she’s one of the normal people that have lunch at a reasonable time and not 11.30am. I got the onion bhaji burger with pickles and mango chutney. It was spicy and ultra tangy with the lime pickles and was one of the nicest things I’ve eaten in a long time.

I finished off with a cup of Earl Grey with Oatly milk and then we had to leave as Evan started throwing his cutlery across the table in an attempt to impale a fork in Joni’s eye.

I would highly recommend DINA Diner whether you’re vegan, veggie or not, it was all the yums.