I’ve always been very proud of my teeth. They’re straight and white with minimal effort on my part and, until recently, a trip to the dentist has been a smug delight for me.

That all changed at a recent dentist appointment when the dentist told me I had a ‘sizeable cavity’ on one of my back teeth. Before I sat in the chair I was going to say something conceited about how I’ll be an easy check up for him, but thank God and baby Jesus I didn’t.

Two weeks later I went back and had my ‘sizeable cavity’ filled, and, with a numb face and heavy heart, I dribbled my way to the Sainsbury’s over the road for some dental floss.

I wonder how many people make a similar pilgrimage after promising their dentist they’ll floss twice a day. I barely have time to go to the toilet, so buying this dental floss was always going to be an empty promise.

I bought some dental floss sticks, which are surely the ultimate in single use plastic. Luckily, I’ve never had time to use them so the plastic sticks are still contained in their plastic wrapper, while my teeth grow all the more vulnerable to another ‘sizeable cavity’.

Dental care is rife with plastic. Apparently 80% of toothbrushes used world wide end up in the sea. This alarming stat is from the Independent website, so it must be true. But I can’t see a reference for it or see where the original stat comes from. If this was the Daily Mail I’d dismiss it instantly of course.

Bamboo toothbrushes are surprisingly cheap. I got four for £10, so not much more than you’d pay for a regular toothbrush.

They were from a company called A One who sent a super lovely note in with them.

The toothbrushes themselves look just like regular toothbrushes. The end of the handles are painted different colours and the bristles are different colours, so family members don’t get mixed up and use someone else’s brush. Thanks to sleep deprivation, I’ve used Andrew’s brush many times by accident so this is particularly useful for me. 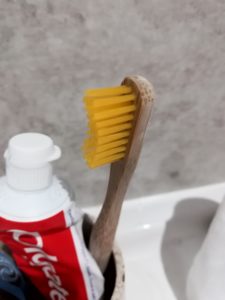 Joni got to pick which colour she wanted and she loved that the brushes came in separate boxes.

The brushes are too big for Evan and they are only just small enough for Joni, so I need to look into bamboo brushes for kids. Joni was more than happy with her new brush and previously it was a battle to get her anywhere near the bathroom at teeth clean time, despite my warnings of a ‘sizeable cavity’.

The brushes we got are very soft so if you’re used to a firm toothbrush, these aren’t the ones for you.

Converting to bamboo toothbrushes has been a really, really simple change to make. Hopefully, when the government have moved on from berating plastic straws they’ll take aim at toothbrushes.